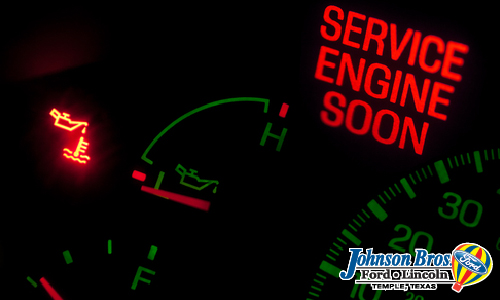 If your engine light comes on in your car you should bring your vehicle in to Johnson Bros Ford as soon as possible so a trained service technician can check the problem. Often, the service engine soon (SES) light comes on but the vehicle still runs properly. This doesn’t mean you should ignore the light.

What Does the SES Light Tell Me? The SES light tells you that there is something wrong with one of the sensors or the computer in your vehicle. The problem could be serious enough to cause the vehicle not to start, it could affect the performance of the vehicle or you may not notice a difference in the way the vehicle runs. It depends which sensor is malfunctioning.

Should I Ignore the Light if My Vehicle is Running Smoothly? No, you should not ignore the light. While it may seem like you do not have a problem, something is not working properly. It could be anything from an oxygen sensor sensing the wrong mixture to a problem with the computer. Often, when a problem arises, the computer will go into “limp home” mode. The vehicle may seem to run okay, but you will most likely notice issues. One of the symptoms is that the vehicle won’t have as much power. Generally, it will run rough if it’s in limp home mode.

Why Does My SES Light Shut Itself Off Then Come on Again? This is what is known as a “soft” code. The computer senses a problem in the engine, but as soon as the problem rectifies itself, it shuts the light off as it doesn’t store the code. While there are a couple of sensors that could send a soft code, the most popular is the oxygen sensor. If you have a soft code for an oxygen sensor, the problem is most likely in the engine, not with the oxygen sensor. The oxygen sensor senses the amount of oxygen in the exhaust. If there is too much that means the engine is not burning all of the air and fuel mixture in the cylinders. This is typically a problem in the ignition system — plugs, wires, coils, PCM/ECM or other ignition components.

I Checked the Codes with an Aftermarket Scanner and it Shows Several Codes: If your vehicle shows several codes that do not make sense, you could have a problem with the PCM or ECM itself. Since the computer cannot diagnose itself, it sometimes tells the technician that there is something wrong by displaying erroneous codes. For example, if you come up with a code for the coolant temperature sensor and the MAP sensor, along with the EGR valve and a code that means nothing and the vehicle is running fine, there is a good chance that the computer has failed.

Because everything on the engine affects something else, you should have a certified technician check the codes and repair the problems causing the SES light to illuminate. You may have a code for the oxygen sensor, but you will be wasting money if you replace it without checking the ignition or other components that affect the mixture. That is just one example of a problem diagnosing your vehicle yourself. You could have one sensor malfunctioning, which could cause another sensor to set a code. Contact a service technician at Johnson Bros Ford if your engine light is illuminated.